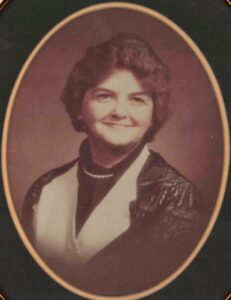 Pat, as she was known (don’t ever call her Patsy), was a proud wife, mother, grandmother and great-grandmother. If you look up the term “feisty broad” you might see a photo of the beautiful Pat McKinnon. She overcame adversity several times in her 83 years. She never knew her father and her mother Gwendolene died when Pat was but a child. Adopted by her grandparents William (Roy) and Pearl McLachlan, Pat grew up to be a smart, resourceful, and beautiful young woman in Brandon, Manitoba. In 1957, Pat was crowned “Miss Bonny Bread” and “Princess of the City”.

Pat married Jack Tennant and raised two sons, John Alan and James Ian. The family moved often but Pat held the group together while working full-time and seeking the support of Al-Anon. Pat and Jack eventually divorced and Pat had to start again with basically nothing in the early 1980s.

Through hard work, tenacity and a kick-ass attitude, Pat built a new career as an office manager and accountant for Calgary advertising agencies and the Ethos Group at the Devenish. She also enjoyed building relationships later as a freelance accountant. She scraped and saved until she bought a condo where she loved to entertain. It was also on the condo’s deck overlooking Fifth Street S.W. that Pat reconnected with her first love, Frank McKinnon. They were engaged to be married August 7, 1957 but fate delayed their union some 43 years.

The two lovebirds reconnected in the late 1990s and married on August 5, 2000. After moving to Winnipeg, Pat played an integral part in helping Frank lead the Manitoba Junior Hockey League as commissioner. Frank retired in 2002 and eventually the duo moved to Calgary where Pat could be closer to her family. Frank passed in 2015 but Pat soldiered on, super proud that she could live on her own, bake to her heart’s delight, play with her great-grandkids and enjoy white wine happy hours while yelling at the TV whenever she damn well felt like it.

Her mountains of photo albums, keepsakes, framed pictures and an iPad full of photos documented her appreciation for her family and friends. Pat was always in the middle of the fun, whether it was at stitch & bitch, with her “Golden Girls”, or keeping everyone in stitches around a campfire. She was always up for a good time, she was caring, generous and sometimes stubborn … a trait she passed on to other generations in the family very effectively, ironically sometimes to her exasperation.

Following Pat’s wishes, there will be no memorial service in Calgary. Instead, the family will host a graveside service in Brandon, Manitoba, where Pat will rest between Frank McKinnon and her mother Gwendolene. The timing of the service in Brandon will depend on the relaxation of the travel restrictions between the Canada/US border.

In lieu of flowers, donations can be made to the Heart and Stroke Foundation.