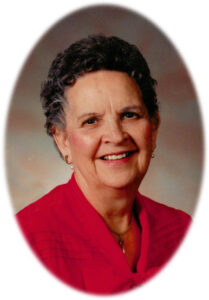 Finstad, Ona (nee Shafer) June 30, 1924 – June 5, 2013 Ona Finstad passed away at the Chinook Hospice on Wednesday, June 5, 2013 at the age of 88 years. She is survived by her six children Valerie Hume, of Cochrane, Judith Finstad-Isaac (Bill Isaac) of Abbottsford, BC, Glen Finstad (June) of Leduc, Donna LaFoy (David) of Calgary, Laura Neigel of St. Albert and Peter Finstad (Janet) of St. Albert; Fifteen grandchildren; nine great-grandchildren; a sister Venla Crapo of Lethbridge; and many other relatives and friends. Ona was predeceased by her husband Peter Finstad; and six brothers and sisters: Merlin, Bill, Zola, Lucile, Jack and Marie. Ona was born in Cardston and moved to Calgary as a young girl, graduating from Crescent Heights High School. She met and married Peter Finstad and together they raised 6 children, moving to various places in Alberta and BC to follow Peter’s work. Since 1994, Ona has been living at the Grace Lutheran Manor in Calgary. Ona has been a devoted and active member of the Church of Jesus Christ of Latter-day Saints, serving in a variety of callings. She had a strong testimony of her Savior Jesus Christ. Ona had a deep and abiding love for her children and their families. She will be dearly missed. A Funeral Service will be held at The Church of Jesus Christ of Latter-day Saints Calgary Stake Centre, 2021 – 17 Avenue SW on Tuesday, June 11, 2013 at 11:00 am with a visitation from 10:00 to 10:45 am prior to the service. A reception will follow the service at the Church. Interment at Mountain View Memorial Gardens. Messages of condolence may be forwarded to the family at www.piersons.ca.