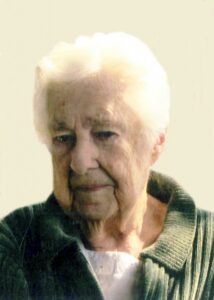 Ola Fulton passed away peacefully at Clifton Manor on December 18, 2018 at the age of 90.

She was predeceased by her ex-husband Kenneth Fulton her daughter Kendra Monck and her sister Hattie (Harriet) Cole.

Ola was born in Timmins, Ontario and returned with her parents to their home in Nova Scotia when she was 12 years old and lived there until 1989 when she moved to Calgary, Alberta with her daughter Irene and where her other two daughter’s, Peggy and Kendra already lived.

Ola got the cruise bug after moving to Calgary and enjoyed numerous cruises first with her friend Evelyn and later with her daughters.

Ola’s family much appreciated the attention and care given to Ola by staff of Unit 500 at Clifton Manor.