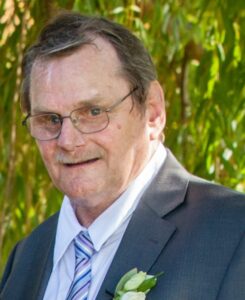 It is with heavy hearts we say farewell to Norman “Norm” John Coleman a beloved Husband, Father, Uncle and friend. He passed away surrounded by his family in Calgary, Alberta on Saturday, December 23, 2017 at the age of 69 years. Norm will be lovingly remembered by his wife Shirley and children Beth, Shawn (Leslie), and Angie (Cory). His memory will be cherished by his grandchildren Deven, Dylan (Stephanie), Jesse, Natasha (Braedon), Amy (Dustin), Izzy (Clinton), Makayla, Nakaily and Cori-Lyn and he will also be missed by his great grandchildren Aiden, Emilio, Dylan Jr, Allison, Tyler and Liam. He will be reunited with his parents Joseph and Shirley, and his brother Ronnie and sister Connie. Norm will be forever remembered for, what some might call a warped sense of humor. He was always able to make people laugh, even in the darkest of times. His love for his family, friends and the Church was very important to him. He was always willing to lend a hand whenever he could. His spirit will continue to live on and will be greatly missed by all those who had the pleasure of knowing him. The family wishes to express their gratitude to the staff who compassionately took care of Norm over the years at the Peter Lougheed Centre, South Health Campus and Foothills Medical Centre. A Memorial Service will be held for Norm at the East Side Victory Outreach Centre (1840 38 St SE, Calgary) on Wednesday, January 3 at 2:00 pm.