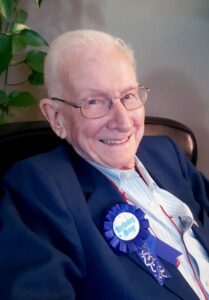 Norman passed away peacefully with loved ones by his side on Friday, March 23, 2018 at the age of 95 years. He will be lovingly remembered and dearly missed by many that were blessed to have known him. Born on August 7, 1922, to Joshua Arnold Carless and Emily Yeomans in Crewe, Cheshire United Kingdom, Norman served diligently in World War II with the Royal British Navy with the rank of telegraphist. While Norman was stationed in Italy, he was responsible for sending out the message for the Germans to surrender therefore ending the war, as well as, the safe convoy of ships from Iceland to Russia. Norman served his country well and had many interesting stories he loved to share of his days in the service. Norman immigrated to Canada in 1966 and worked for his own television repair service, which eventually lead him to work with Foothills Hospital as a biomedical technician. He worked there until his retirement. During this time Norman joined the Church of Jesus Christ of Latter-day Saints and followed his path back to the Lord diligently, through the gospel of the church and the atonement of Jesus Christ. Norman graciously awaited a reunion with many that passed before him while knowing that he will be dearly missing here on earth and that one day we will reunite again. Predeceased by his daughter Jillian Carless, beloved wife Doreen Carless of 63 years, and most recently his brother Harold Carless. Norman leaves behind three grandchildren, Jeffrey Carless, Stephanie Breitenstein and Ryan Carless and three wonderful great grandchildren Gideon, Abigail and Annika whom he adored and spent many hours with. Norman had a loving, gentle, generous spirit that he shared with all he met. A love for animals and all mankind, especially his brothers and sisters within the church and a focus on family strengthened his purpose. He was fascinated by trains and locomotives, and all things electrical he could tinker with. He spent many hours building friendships across the world via a traditional ham radio unit he built in his basement. Dearly missed and never forgotten. Till we meet again! VE6AUV signing off.