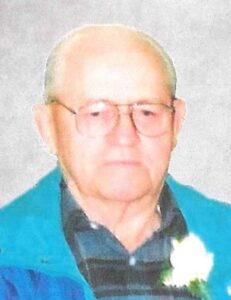 Nicholas (Nick) German passed away peacefully at Bethany Care Center, Calgary, AB on January 3, 2021 at 96 years of age. Nick was born to John and Mary German in Luseland, SK on December 14, 1924.

Nick spent his youth working on the farm along with his 18 siblings, later taking up the carpentry trade. Along with other carpenters, he was kept busy building houses, farm buildings and doing renovations throughout the Luseland area.

On July 21, 1956, he married Regina Weinmeyer, a widow with 7 children. In 1964, Nick moved his family to Saskatoon (Sutherland), where he continued his carpentry trade doing many renovations in homes and multilevel office buildings. He loved his work and made many friends along the way. He retired and moved to Calgary in 2012.

Nick enjoyed his sports, ball in particular. In his youth, he was regularly found on the ball diamond on a Sunday afternoon. In his later years, he became an avid Toronto Blue Jays fan and a professional armchair critic of the coaching and management when they lost.

He loved his grandchildren and was seen most often with either one or two hanging over his shoulder, being burped or on the floor roughhousing. He especially looked forward to walking the dogs in the evening.

He will be missed for his quiet ‘get up and get it done now’ attitude, gentle nature, tongue-in-cheek humor and wit and genuine, warm smile. We will all miss him.

Interment is planned for the spring/summer in Saskatoon.