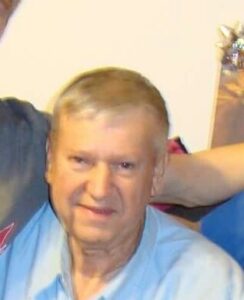 Nadio Laganis was born at Laganisi, Istra, Croatia on June 27th 1945. At 18 years of age he left his country and stayed in Italy for a year before immigrating to Montreal, Canada in 1964. In April of 1966 he met the love of his life Nevenka Jagich and were united in marriage on July 20, 1966 in Toronto, Ontario. In 1969 he moved his family to Vancouver B.C. and the Lower Mainland. In 1985 he moved his family to Calgary, Alberta where he operated an Auto body business together with his son Emil until 2009 when he lost his son Emil to Pancreatic Cancer. He loved cars, building houses, camping, fishing, family gatherings and holidays. Nadio is remembered for his loving heart and helpful nature. After a courageous battle with cancer, Nadio Laganis passed away peacefully at Santuari Hospice into the presence of his Lord on May 08, 2015. He is predeceased by his father Joseph, his mother Gina and son Emil. He leaves to mourn his passing and cherish his memory, his loving wife Nevenka Nancy; one daughter Ellen; his in-laws Joseph and Dragica Jagich; a sister Graciela; brother Mario and Fiorela; three sisters-in-law: Millie and Vic, Anjelica and Lloyd, Elisabeth and Richard; one brother-in-law Joseph and Sharon; daughter-in- law Sheila and Min; five grandchildren, Christian, Katelynn, Austin, Darlene and Hope ; seven nieces, Sandra, Daniela, Koryn and her family, Shannon and her family, Maellodie and her family, Allyne and her family, Mechele and her family; six nephews; Luciano, Robert and his family, Christopher and his family David and his family, Marcell and his family, Steve and his family; numerous aunts and uncles in Istra, Croatia; two uncles in Argentina; as well as his daughters lovable pet Levi.

The family will be having a celebration of his life on his birthday June 27, 2015 and are welcoming all to come and celebrate with us in Creston BC. In lieu of flowers donations may be made to the Canadian Cancer Society.