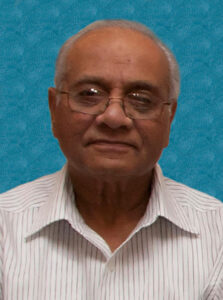 Moavia was born in Muzzafarnagar and raised in Jaipur, India by his loving parents the late Dr. Mohammad Umar and Suriya Umar. He immigrated to Pakistan in his early 20s and then to Calgary, Canada in 1973. Moavia passed away at the Peter Lougheed Centre, after a brave struggle with Acute Respiratory Distress Syndrome, peacefully, surrounded by his entire extended family, whom he loved very much. Moavia is survived by his loving wife of 35 years, Hamda, his daughter Anila (Stefan Lee Yuen), son Sohail and the many extended family members, including two brothers, three sisters and their families residing in Calgary, he cherished so much. Moavia loved the simple things in life. He enjoyed spending every Friday night with his entire extended family. He was especially fond of the family children and enjoyed time with them. Moavia was a loyal Calgary Flames fan and enjoyed Urdu poetry, especially Mirza Ghalib. He loved the music of Mukesh, would often spontaneously start dancing and looked forward to the summer months because he loved to be outdoors and barbeque. The motto he lived by and which he taught his children to live by was to live life to the fullest and create your own destiny. Moavia was a devout Muslim. After retiring from 30+ years as a Supervisor with CWD Windows and Doors (now Plygem), he volunteered his time every day at Baitunnur mosque. In lieu of flowers, donations will be accepted to the ‘Maryam Shadi Fund’ c/o ‘AMJ’ (Ahmadiyya Muslim Jamaat), Baitunnur Mosque 4353 54 Ave NE Calgary AB T3J 4L3 (http://www.baitunnur.org/) to assist girls in financial need with their marriage preparations.