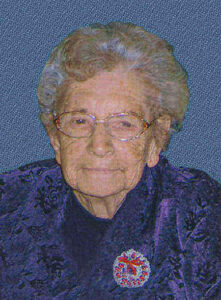 Mollie Schnell passed away peacefully on Friday, December 30, 2011, at the Carewest George Boyack in Calgary, Alberta at the age of 93 years. She is survived by one sister, Anne Helzer of Calgary; sister in law Beth Schnell of Castor; as well as numerous nieces and nephews. Mollie was born August 2, 1918 in Castor, AB to Peter and Elizabeth Schnell. Mollie was the seventh of 13 children, 11 of whom lived to adulthood. Mollie worked on the family farm and in neighboring communities. During World War II, Mollie worked in an ammunitions factory in Ajax, Ontario. After leaving the family homestead, Mollie resided with her special friend Edgar Bedson for many years. She then moved to Calgary in 1992. Although living away from Castor, Mollie cherished the telephone calls, letters and cards from her many long-time friends in the Castor area. Special thanks is extended to the wonderful staff at the Careswest George Boyack for their loving care of Mollie. Memorial Service to be held at the Castor Evangelical Missionary Church (5314 50th St, Castor, Ab) on Friday, January 6, 2012 at 1:30 pm. Messages of condolence may be forwarded to the family at www.piersons.ca.