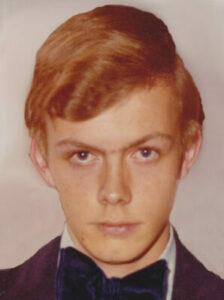 MIKKELSEN, Michael Thomas Born June 3, 1954 Passed away peacefully with his wife at his side January 23, 2014.

He is survived by his wife Gloria Mikkelsen, his daughter Shelly Mikkelsen (Chris), his sons David Mikkelsen (Anna) and Tony Mikkelsen, his brother Allan Mikkelsen and 7 grandchildren Tyler, Tayla, Ty, Jonny, Nicky, Keira and Pugsley. His 3 fur babies Sammy, Pikachu and Gizmo. He was predeceased by his father Thomas Mikkelsen, mother Kathrine Mikkelsen and his granddog Max. Mike was born, raised and lived his entire life in Calgary, Alberta.

Our Dad was kind of a mean man: strict as hell, moody, isolated and set in his ways. He never came to our school shows or family celebrations; he was a man of few words, hardly ever expressed emotion and feelings were not something talked about. He was more at home alone, in his chair with a beer, a cigarette and a mild look of disapproval.

He had two loves in his life, our mum and the open road. As a trucker, Dad wasn’t home very often when we were little, always heading back out on the road, wearing his favourite baby-blue button down shirt and jeans, living off coffee and cigarettes. Mum would always been there to look after us and to welcome him home- and no matter how many times she’d threaten “wait until your dad gets back,” she’d never rat us out.

Not everyone got to know our dad on the inside. He didn’t make friends or small talk easily – and he liked it that way. He was a man who didn’t put on airs; he was who he was and didn’t give a damn what anyone thought.

If he had a soft spot, it would be for kids- fur-covered or human alike. But our Dad wasn’t one that coddled us as kids; he’d never let us win at games but after facing him so many times across the crib or chess board, if you challenged any one of us now we’d easily beat you. He believed in tough love because to him, life was tough and he wasn’t doing you any favours by letting you have it easy.

Still, he sent postcards to his grandchildren from every state he visited. He taught them woodworking and how to cook from the time they could stand. And even as he’d yell “you’d better not let that stray cat inside,” from his chair, he’d end up being the one who adopted them.

Dad was his own man, he didn’t mince words or suffer fools gladly. His sense of humour was drier than a prairie winter and sometimes as harsh. If you didn’t get the joke, chances are you were the butt of it. And yet, even with people describing him as “prickly” on a good day, or “miserable bastard” on a bad one, he was surrounded by family and friends.

We took him for who he was, loved him for his faults and will cherish our time and memories we have of our dad, Papa Mike.

We know you’re back on the road again, Dad. And we’ll wait until we see you again.

We love you. We miss you. Safe Journey.