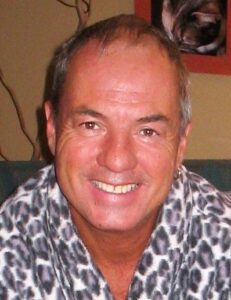 It is with profound sadness that the family of Michael Ray Polly announce his sudden passing January 1, 2020. He was 65. Mike was born in Toronto, Ontario, January 18, 1954. As a youth he was active in sports and spent time as both an altar boy and choir boy in the Catholic church where his nascent vocal talents were discovered. Mike moved to Vancouver where he fronted a rock band called Anvil Hawk. Mike went on to become a renowned singer, performer and lyricist with the Canadian recording act, Sentinel. Mike turned down several offers, including auditioning for Black Sabbath and an invitation to form a band in New York, to remain loyal to his Sentinel brethren. He spent some time living in Hawaii and Mexico as an ex-pat but always returned to his beloved Canada. Mike loved to learn and continued his education by attending NAIT (Northern Alberta Institute of Technology) in Edmonton, AB from 1990-1993 obtaining honors while majoring in Biological Sciences. Mike was a die-hard Toronto Maple Leafs fan and never missed a chance to cheer them on. Mike was a charismatic man whose personality entered and filled the room before he did. No one that met Mike ever forgot him. He found humour in most things and enjoyed the people he was with whomever they were. He lived large and he lived in the moment. He had a soft heart for animals and surrounded himself with them when life permitted. Mike had a platoon of angels that worked overtime. It is to our deficit that they have taken him home. Mike was preceded by his mother Faith and sister Susan. He will be missed by his father and stepmother, Jack Pauley and Jacqueline Bowering of Victoria, BC; his nephew Mike Tuck; his children, Tara and Zack, his best friend, Sandy Lawson and the love of his life, Joanna Kucy.