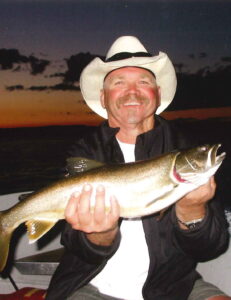 Mike King was a â€˜larger than life guyâ€™ with a heart to match, who always gave the biggest hugs. Never one to mince words, you always knew where you stood with him. Mike called things as he saw them and never held anything back and we loved him for it. Lucky enough to find the love of his life early on, Gerri and Mike were married for 33 wonderful years with whom he had two amazing and well rounded sons Michael and Daniel King who have grown into copies of their father.

Though his passing was sudden, Mike packed more life into his short 63 years then most. Mike worked many years as a skilled crane operator and truck driver. When he wasnâ€™t busy working you would find Mike (to the horror of his wife) returning home with another vehicle, riding his Harley Davidson, fishing and river boating on the Bow river or spending time with his family in his favorite La-Z-Boy.

Mike, you are now in a place where the river never ends, the pavement is always smooth, the air is warm and clear and the gas is free! You will be truly missed as a husband, dad, uncle, brother-in-law, father-in-law, Grumpa and friend to all who had the distinct pleasure of being a part of his life.

The family would like to thank everyone for their support and condolences at this time. For the safety of family and friends, there will be no service and in lieu of flowers, the family asks that donations be made to The Heart and Stroke Foundation of Canada.