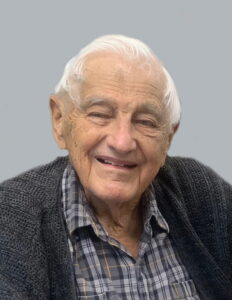 It is with great sadness that the family of Michael Komarevich announces his passing on March 6, 2021. He was a courageous soul who had been living with Kidney Disease for many years.

Michael was born in 1930 and raised in Fernie BC. In his youth he excelled at sports and enjoyed many outdoor activities including hunting and fishing.

Michael moved to Calgary as a young man, where he met his loving wife Stella through mutual friends. They married the following year and recently celebrated their 65th wedding anniversary.

Over the years, Michael enjoyed many careers including working on a small railroad in Fernie and the oil industry in Calgary.

In 1971, Michael and Stella opened Komarevich Originals Ltd., which carried his unique hand-crafted jewellery as well as fossils, crystals and a plethora of treasures from around the world. His son Michael Jr. continues to run the business.

Michael will be remembered by all who knew him as a kind, honest and giving man, who always saw the best in everyone. He was a natural storyteller who filled any room with joy and laughter. He loved rock-hunting, travelling, gold-panning and spending time with family – his grandchildren being the most precious gems in his collection.

In keeping with Michaelâ€™s wishes, he will be cremated, and no service will be held. Those who knew Michael are encouraged to honour him in their own special way.

No flowers please. If desired, donations can be made to the Alberta Kidney Foundation in Michaelâ€™s name (www.kidney.ca).