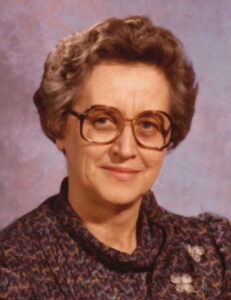 Matilda “Mat” Forsyth passed away on Tuesday, July 14, 2020 at the age of 96 years. She will be lovingly remembered by her son Neil (Bette) Forsyth; daughter Ruellen Forsyth (Jonathan Nicholson); 9 grandchildren; 25 great grandchildren; and many more family and friends. She was predeceased by her husband, Mylo, in 2016.
Mat was born and raised in Emerson, MB. After High School, she attended Normal School in Winnipeg, and then began teaching in Tolstoi, MB. Meanwhile, her sister Helen was on her way to an army posting in Ottawa with a young soldier, Mylo Forsyth, and gave him her sisterâ€™s name and address so he could write to her. That correspondence turned to love, courtship and a proposal. They were married in 1946 in Port Arthur, ON where her parents had moved from Emerson. The couple then returned to Myloâ€™s home in Cardston, AB, where Neil was born. After Neilâ€™s birth Mat taught for a year at the New Elm Hutterite colony. They moved to Calgary in 1948 for Myloâ€™s job at the CPR. Ruellen arrived during the Stampede Parade in 1950.
Although Mat was a talented visual artist, teaching was the passion in which she excelled. As she continued to teach and educate herself, she found a niche in recognizing and assisting those with learning disabilities, including training other teachers in Alberta and British Columbia when the CPR transferred Mylo to Cranbrook. After retirement they returned to Calgary, then served a mission to Zaire , Africa for The Church of Jesus Christ of Latter-day Saints in 1990-91. In both Africa and back home Mat was dedicated to improving literacy among adults with learning disabilities and ESL challenges. Her kindness and mentoring brightened lives all around her.
A Family Funeral Service will be held for Matilda on Friday, July 24, 2020 at 2:00 pm. As the attendance is limited, those wishing to participate in her service from home can do so at us02web.zoom.us/j/81833607303.
Mat’s family would like to express their sincere appreciation to the staff at the Bethany Care Centre in Cochrane for their loving, compassionate care for our beloved Mother and Grandmother. Instead of floral tributes, donations may be made in Matâ€™s memory to the Canadian Cancer Society (www.cancer.ca) or Bethany Care Society (www.bethanyseniors.com).