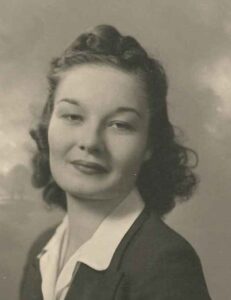 Mary is survived by her two sons, Jack (Joan) Clarke of Nanaimo, BC and Eric (Kim) Clarke of Priddis, Alberta; granddaughter, Karen (Jac) Meyer of Victoria , BC and their two sons, Aiden and Julian along with numerous nieces and nephews. Mary is pre-deceased by her grandson, Patrick Clarke; parents, John and Anna Spivak; brothers and sister-in-laws, Nicholas (Dolly) Spivak, Joseph (Clara and Jean) Spivak and Walter (Vera) Spivak and her ex-husband Gerald Clarke.

Mary, Nick and Joe were born in the Ukraine near Lâ€™viv. Mary was the oldest sibling. Their family immigrated to Canada in the mid 1920â€™s via a passenger ship and long train voyage. They settled near Beauvalen, Alberta where Maryâ€™s father farmed and also blacksmithed for many of the farmers in the area and where Maryâ€™s youngest brother, Walter was born. Mary enjoyed sports as a young girl playing softball, skating and bicycling as well as helping extensively around the home. Mary trained as a hair dresser in Edmonton where she met and married Gerald Clarke, who worked in a bank. After Gerald returned from the war in Europe, they had two sons and lived in many towns and cities throughout Alberta including Drumheller, Ponoka, High River, Edmonton, Grande Prairie and Calgary where Gerald worked as a bank manager. After separating from Gerald in the early 60â€™s, Mary started a beauty salon business in Edmonton, raised both boys and helped to put them through university. Not easy for a woman alone in the 60â€™s and 70â€™s but Maryâ€™s bravery and drive got her through this tough time. Growing up, Maryâ€™s sons remember many happy occasions spent with the extended Spivak family in Edmonton.
In later years, Mary retired and travelled throughout the states. She then split her time between Arizona and her house in Calgary. Both of her sons moved overseas in the 90â€™s so she travelled alone to Kuwait and South Africa to visit them on a number of occasions. Nothing daunted this little lady whoâ€™s family meant everything to her. Mary was an expert gardener and loved to cook big meals for her family. Mary, Eric and Kim also spent many happy holidays with the Mason family in Wetaskiwin and with the Martin & Grieve families in De Winton. In her twilight years, Mary lived with Eric and Kim and then spent her last couple of years in a care facility in Calgary. She loved picnics in the field while Eric was harvesting and spending time in the outdoors. She was kind and generous and would give or do anything for her family. She passed away quietly in the Rockyview hospital on Valentines day. She will be greatly missed.

In lieu of flowers the family would appreciate contributions to the Alzheimer’s Society of Alberta or a charity of your choosing.

A Funeral Service will be held for Mary at Pierson’s Forest Lawn Chapel (4121 – 17 Avenue SE, Calgary) on Monday February 22, 2021 at 11:00 am. Due to the COVID-19 Pandemic, we are only allowed to invite 20 people to the service, but all family and friends are welcome to watch the service via Zoom from the comfort of your home by selecting the Watch Even link below.