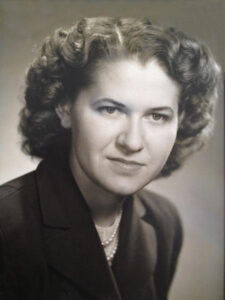 Letourneau, Martha Elizabeth November 22, 1930 – January 25, 2014 Martha Elizabeth Letourneau (Koberstein) passed away in Calgary January 25, 2014. Born November 22, 1930 in Mellowdale, Alberta, Martha grew up in Barrhead, Alberta and lived at various times in all three Prairie Provinces and British Columbia. Martha made life-long friends everywhere she went, and enjoyed a 23 year career with the Royal Canadian Mounted Police in Edmonton, retiring in 1993. Martha was predeceased by husband Rene, sister Elsie, brother Robert and grandson Matthew. She will be missed by her loving sons Alan (Serena) and Gary (Julie) Newcombe of Calgary, grandchildren Alex, Sierra, Natalia, Beth, Amy, Mark and Colin, great-grandchildren Sophia, James, Lucas and Emmylou, her brother Reinhold Koberstein of Barrhead, sisters-in law Evelyn Koberstein of Hinton, Alberta, Mavis Newcombe of Malagash, Nova Scotia and many cousins, nieces and nephews across Canada and the U.S. Afflicted with Parkinson’s disease for many years, Martha always retained her spirit and outgoing nature and provided all who knew her with many wonderful memories. We want to thank her caregivers and companions in recent years, and in particular Ank Komen, whose company was a great comfort to Martha. Services will be held at Pierson’s Funeral Home, 4121 – 17th Avenue S.E. Calgary at 1:00 pm Friday February 7, 2014. In lieu of flowers, please make any donations to the Parkinson’s Society of Canada, 4211 Yonge Street, Suite 316, Toronto, ON, M2P 2A9 Messages of condolence may be forwarded to the family at www.piersons.ca.