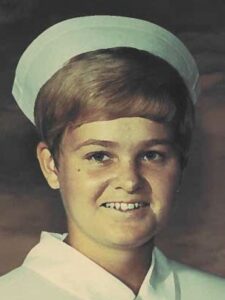 We would like to announce the passing of Marsha Dianne Winters on Tuesday, February 8, 2022 at the age of 73 years.

Marsha was born in Raymond, Alberta on February 9, 1948. She was the second daughter of four to Floyd and Ione Winters.

She is survived by her two younger sisters, Karen Winters Sulphur and Shelley Winters; and her beloved cat, Lola. (Her older sister, Lynne Winters Heninger, passed away on July 27, 2022.) She is also survived by many nieces, nephews, grand-nieces and grand-nephews.

When Marsha was younger, she actively competed in sports. She won many shooting competitions as she was an exceptional marksman. She was also a Junior Champion from the Calgary Sports Women’s Association. Marsha graduated from Red Deer College in 1969 with nursing credentials. She loved working with handicapped children and adults, and advocating for them. Even though she retired in 2004 she still had her stethoscope and her nursing drug guide handy in case she needed to look something up. One of Marsha’s great loves was her cats, Gus, Casey, Dash and Lola to name a few. She believed in rescuing cats and giving them a great home. Marsha liked living in smaller towns like Raymond, Red Deer, Cochrane and Langdon but spent many years living in the city of Calgary. Regardless of where she lived, she liked to have a beautiful yard and gardens. Marsha had an infection laugh and a great sense of humour. She loved family and friends and was an active participant at events. Marsha also enjoyed attending rodeos, which may have stemmed from her childhood in Raymond as the 1st of July always had an amazing rodeo.

Marsha will be interred in Raymond at the Temple Hill Cemetery on Saturday, September 17 at 11:00 a.m.