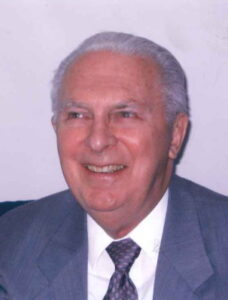 It is with heavy hearts that the family of Marlin Cecil Locking announce his passing on November 3, 2016 in Calgary, three weeks before his 90th birthday. Marlin is survived by Shirley, his loving and devoted wife of 66 years; his children Dennis (Sharon), Trudy (Gary), and Donald (Shari); his grandchildren Jennifer (Sean-Paul), Ryan (Angie), Jacob, Sheldon, Emily, Conrad, and Trevor; his six great- grandchildren; and his nieces, nephews and dear friends. Marlin is predeceased by his parents Hazel and LaVerne and his sisters Fern and Colleen. Marlin was born in Fort Frances, Ontario on November 24, 1926. He joined the Canadian Armed Forces during the Second World War. Following his discharge from the army, in the late 1940’s, Marlin moved to Calgary where he met the love of his life, Shirley. The two were married on July 14, 1950. They spend many years working hard to raise and support their family. Marlin worked as an accountant for many years before joining the Provincial Government as an auditor in the Auditor General’s Office until his retirement in 1990. In 1992, Marlin and Shirley served a mission in Tonga. They left such a strong impression that one September day the entire rugby team showed up unexpectedly on their doorstep! Marlin was a stoic man who lived by the values of his faith; he was strong willed, had strong opinions, and strong direction. He led by example, demonstrating an unwavering work ethic both professionally and personally. Marlin was very supportive of his family as well as members of his community. His service to others was selfless and sincere. He excelled at and had a lifelong passion for hockey, playing right wing up until he was 74! Marlin and Shirley loved to dance, performing countless spins on the dance floor. As Shirley’s health deteriorated, Marlin’s devotion to her care and wellbeing was unfaltering beyond the point of human endurance; he never complained. He will always be remembered as a loving, kind, caring, and compassionate man who will be dearly missed and forever loved. A Funeral Service will be held for Marlin at The Church of Jesus Christ of Latter-day Saints Cranston Chapel, 200 Cranston Road SE, Calgary, Alberta on November 9, 2016 at 11:30am. All are welcome. Messages of condolence may be forwarded to the family at www.piersons.ca. Arrangements are in care of PIERSON’S FUNERAL SERVICE. Telephone 403 235-3602.