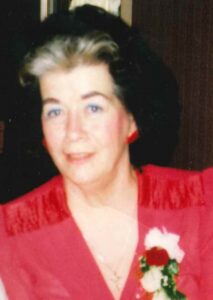 Marjorie Lowe passed away on Sunday March 18, 2018 at the age of 84 years. She was born in Rockyford, Alberta to Alfred and Marcella and took her schooling in Baintree and Rockyford. In 1949, Marjorie married Richard (Dick) Lowe who passed away in 2000. She is also predeceased by Sean, her special partner and friend; sons Glenn and Wesley; and daughter Marlisa; parents Marcella and Alfred; brothers Gerald and Emmett and sister Angela. Marjorie is survived by her brother Weldon; children David, Randy, Murray, Garnett, Derek, Shawna and their families. Her 17 grandchildren and 13 great-grandchildren were the love of her life. Mom was passionate about her music and was an organist for 29 years at St. Francis. She had her own little band called the Bad Apples. She worked at the General and Peter Lougheed Hospitals for many years. Funeral Mass will be held for Marjorie at St. Cecilia Roman Catholic Church (321 – 90 Ave SE, Calgary) on Saturday, March 24, 2018 at 1pm. In lieu of flowers, the family kindly requests that donations be made to the Heart and Stroke Foundation of Canada.