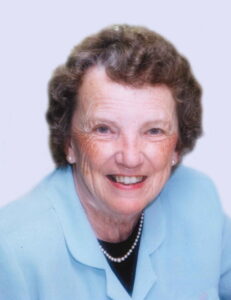 Marilyn Kearl passed away on Tuesday, January 14, 2020 at 95 years of age. She will be lovingly remembered by her husband of 72 years Harold Kearl; children Eldon Kearl (Kim) of Calgary, Kathy Lowe (Bruce) of Portland, OR, Robert Kearl (Beth) of Langley, BC, Jean Smith (Paul) of Spokane, WA and Brent Kearl (Kim) of Calgary; 23 grandchildren and 60 great-grandchildren. Marilyn was predeceased by her parents Myron and Melba Holmes and sisters Sylvia Piepgrass, Kathleen Hunsaker, Alice Harding and Joan Strain. She is survived by her sister Jean Jackson.
Marilyn was born in Lethbridge and raised on a farm in a small three room home near Raymond, AB. The six girls worked the farm with their Dad combining wheat, raking alfalfa, stoking hay and picking beans. Her father landscaped and build their dream home which included four bedrooms, electricity and indoor plumbing. She gained a love for music in her childhood. Their home was full of love and security. Marilyn, Alice and Kathleen sang in many duets and trios together.
Marilyn graduated from Business College in Saskatoon as the Class President. She worked for the Alberta Wheat Pool. Later during the Calgary Stampede she met Harold, a veteran pilot of the RCAF. They soon married eventually creating a family of five children.
Marilyn’s focus as a peacemaker was always the welfare and happiness of others. Her children always knew of her deep and abiding love.
Marilyn enjoyed leading many choirs in the Church of Jesus Christ of Latter-day Saints. She understood the inspirational power of music. Marilyn served in many responsibilities at both the ward and stake level including twice as Relief Society President and as a missionary with Harold for 18 months in the Philippines.
Marilyn worked for eleven years as a secretary at Western Canada High School in the main office and guidance office.
Marilyn and Harold traveled to many countries across six continents. Recent hospitalization was blessed by professional and compassionate medical staff at the Rocky View and Foothills Hospitals.
Marilyn’s adventures continue as she has been taken home to God who gave her life.
The Celebration of LIfe will be at the Crescent Road Chapel of The Church of Jesus Christ of Latter-day Saints (202 Crescent Road NW, Calgary) on Saturday, January 18, 2020 at 11:00 a.m. Visitation for family and friends will be held prior to the service beginning at 9:30 a.m. Interment will follow at Queen’s Park Cemetery.
If friends so desire, memorial donations may be made to FMC Music Therapy. Contact [email protected]