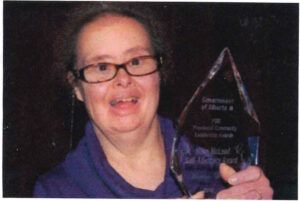 Marilyn passed away in Calgary after a brief battle with cancer. She was predeceased by her parents Mary and Lloyd Wilson and stepmother Elva Wilson. She will be lovingly remembered by her sister Kathryn (Ray) Atkinson, nephew Geoffrey (Josie) Atkinson, and great nephews, Jake and Brett Atkinson. She is also survived by three first cousins, Shirley Scott, Ont, Betty Myles and Diane Belyea, NB and numerous other extended family. Marilyn moved to Calgary from NB in 1986. She excelled with her achievements including being awarded the Norm McLeod Self-Advocacy Award for the Province of Alberta; a Woman of Vision Award sponsored by Global TV and the Calgary Herald. She also was very much involved in starting a Toastmasters Chapter at the Developmental Disabilities Resource Centre (DDRC) of Calgary. Marilyn loved public speaking and has a way of drawing attention to herself through her charming smile and excellent oratory skills! Marilyn had many excellent caregivers and support workers over time in Calgary. It would be remiss not to include Diane Chisholm who has been her caregiver for the past six years and has been relentless in providing loving care to Marilyn through the biggest challenge she faced in her life. If friends so desire, memorial tributes may be made directly to DDRC, 4631 Richardson Way, SW Calgary, AB. T3E 7B7, or to the donor’s choice. An Open House Celebration of Marilyn’s life will be held at DDRC from 1:30 to 3:30 on July 17, 2014.