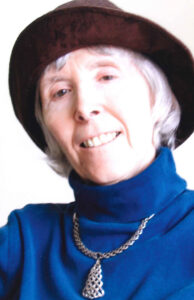 Marie Jakober passed away on March 26, 2017 in Calgary, Alberta at the age of 75 years.Marie was born and raised on an isolated farm in Fairview, Peace River Country of Northern Alberta where she honed her expansive imagination. She is survived by her older sister, Peggy O’Brien (Edmonton). Marie is predeceased by her parents, Simon Nicholas Jakober and Kathryn Garrecht and her two siblings – Richard Jakober and Irene Jakober. She was a fiercely loyal and loving friend. Marie was a writer and public intellectual renowned for her abilities to penetrate the core of society’s religious, political and social workings. She was admired for the power of her writing and public speaking. Marie wrote 9 innovative, incisive novels in various genres including historical fiction, speculative fiction, and science fiction. Her writing is described as “powerful”, “thrilling”, “fascinating”, “lively”, and “vibrant”. Marie was an active participant in the Women’s Movement, and her work resonates with a complex, nuanced view of gender politics and women’s power. Her writing awards include: The Writer’s Guild of Alberta Novel Award, the Independent Publishers’ Best Novel Book Award, and the Michael Shaara Award for Excellence in Civil War Fiction (for her novel, Only Call us Faithful). Marie was the first woman and only Canadian to have won the Michael Shaara Award. She was a long-term member of the Writer’s Guild of Alberta and the Writer’s Union of Canada. In the 1980’s Marie was involved in activist work with Latin American exile communities in solidarity with Central American struggles of that era. . Marie was proud of her work at the University of Calgary Library where she was employed for many years. At Marie’s request, no funeral service will be held.