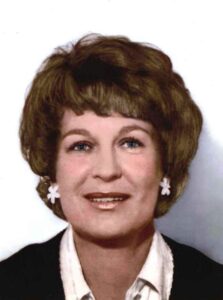 It is with sadness that we announce the passing of our wife, mother and grandmother peacefully on September 29, 2014. Marianne is dearly missed by her husband Ben of 58 years as well as her children Bryan (Linda), Darrel, Barry (Janet) and Lorraye. Marianne, last child born to Mary and Charles Sauter, began her life in Vauxhall, Ab. While still a child she moved with her parents to Calgary and attended Western Canada High School. For several years after graduation she was an employee with American Airlines and later worked within the computer department with Shell Oil both in Calgary and Edmonton for a year while supporting Ben in his final year of study with the U of A. Marianne’s strong committed faith to our Lord and Saviour Jesus Christ was a testament of her love to others. Her life was filled with family and friends who cherished her devoted lifestyle in service to church and home. Thank you to all who have prayed and supported our family through the final chapter of her life. A special thanks to Cochrane Homecare and Carewest Sarcee for their excellence in providing peace and comfort. It is the wish of Marianne and family that a private Celebration of her Life will be held. In lieu of flowers donations can be made to www.HART.ca.