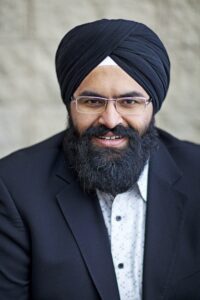 On Monday, November 23, 2015, Manmeet Singh Bhullar, the love of Namrita’s life, made his final journey on a road he traveled countless times over the past eight years. Like many other trips, this one also led him to help someone. Welcomed into the world on March 1, 1980, he immediately gave blissful joy to his parents, Baljinder Singh and Sukhvir Kaur Bhullar, his grandparents, Jagir Singh and Mohinder Kaur Bhullar and Late Ram Singh and Late Gurdev Kaur Shergill. He easily eclipsed his older sister Tarjinder’s prominence in the family. A few years later, he said hello to his younger brother Appy, who would become his lifelong right hand man. His aunts and uncles from the Bhullar, Shergill, Lail, Sekhon, and Sidhu family, showered him with love. His cousins Amardeep (Sukhi), Tammy (Sanjay), Parabhdeep, Sonny (Nisha), Shannon (Inder), Sam, Dilpreet (Balcharan), Jasleen, Sundeep, Sharon, Simran, Karen, Harmol, Rabina, Jagmeet, Hamreet, Anmol, Arvinder, Aman (Stacey), and Raman, gave him endless love and laughter. His friends, who if named here would leave little room for any other stories in today’s paper, were synonymous with family. Growing up he played hockey on the streets and driveways of Whitehorn and dabbled in tae kwon do, where he mastered skills less and dramatic poses more. He had entrepreneurial spirit, with a lawnmower and cousins in tow. A proud northeast boy, he never forgot about his time at Chief Justice Milvain Elementary and Annie Gale Junior High. The only time you didn’t prominently see him with his turban, was when he put on a helmet to play High School football at Lester B. Pearson High School. He didn’t fancy himself as an academic, yet somehow he went on to get his Bachelors in Sociology, beginning it at the Mount Royal University and completing it from the University of Athabasca. Later while MLA, he obtained his Law Degree from the University of Windsor. He was the first to encourage others to pursue further education. It was a chance meeting at an evening Punjabi class 13 years ago, where he attended as a guest speaker, that Namrita Rattan entered his life. The rest, as they say, is history. In some ways their relationship defied logic. In every way it showed you that real love means having an unabiding faith in one another, matched with patience and humour. On January 7, 2012, they became husband and wife. Her parents, Dalbir Singh and Kiran Kaur Rattan, sister Sushana (Jason), and brother Harsimer, welcomed him as a son and brother long before the wedding.

Manmeet welcomed another sister into his life when Appy married Amrit in 2013. The relationship that guided him most was the one he shared with God. Sikhism gave him the convictions of seva (selfless work), equality for all, and the responsibility of sharing the sorrow of others as if they are your own. Manmeet served his community and championed causes long before he entered politics and would have done so long after he left. He was and always would have been a public servant. He was the light in our lives.

In lieu of flowers we kindly request you make a donation in his memory to the Sheldon Kennedy Child Advocacy Centre at www.sheldonkennedycac.ca. Messages of condolences can be forwarded to the family at alberta.ca/memorial/manmeet-bhullar-memorial.cfm