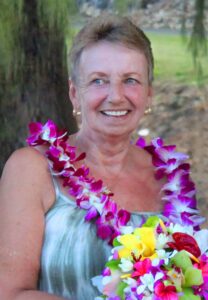 Manja was born in The Hague, Netherlands in 1949, her parents immigrated to Canada in 1952. Once in Canada her younger sister and brother were born. Manja excelled at school and graduated from Forest Lawn High School. Once out of high school Manja quickly went into the workforce. Manja met her husband Garry in June of 1969, the two quickly fell in love and married in October 1969. Once married Garry and Manja started their own cleaning business, which would evolve and change over the years into a successful print and advertising business that was truly a family business. Manja’s meticulous book keeping always kept Garry on the right path.

Manja and Garry travelled often, with adventures to Hawaii, Mexico, Jamaica, St. Maartan, Cuba, Florida, Oklahoma, Louisianna and Europe. While most trips were just the two of them, they did have a few adventures along the way with friends and family.

Manja was a fantastic mom and grandmother who always enjoyed having her kids and grandkids around. Manja could be found proudly watching her grandkids excelling at school, work and sports. She was always there to see them graduate or receive awards with a smile that beamed. Manja and Garry could be found at the rink each winter, cheering on their youngest grandson Brayden from the time he started playing Timbits hockey through his minor hockey and most recently watching games online while he played Junior hockey in British Columbia. Many memories and friends were made at the rink.

We will miss her love, laughter and sweet smile, the way she always cleaned up a room when she entered it.

A Memorial Service will be held at Pierson’s Forest Lawn Chapel (4121 17 Avenue S.E, Calgary) on Saturday, July 10, at 2:00pm. Those wishing to watch the service from the comfort of your home may do so via this link here.