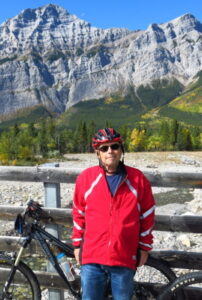 Malcolm Wilcox passed away on September 11, 2021 at the age of 62 years in Calgary at the Foothills Hospital after a brave battle with cancer.

He was born in Thunder Bay, Ontario to Allie and Keith Wilcox on December 27th. Malcolm lived in a number of cities in Ontario, British Columbia and finally settled in Calgary in 1981. Malcolm had a number of interest including gardening, travelling, walking, camping- especially sitting around the camp fire but his favorite pass time was riding his bicycles on the trails around Calgary, K-Country and Jasper. Malcolm graduated from the University of Calgary with a BA in 1989 and worked for many years in the Records Department at Esso.

Malcom is survived by his brother, Bill of Peterborough Ontario. He was pre-deceased by his sister, Marie Wilcox.

A big thank you to the incredible people at the Tom Baker Cancer Centre and to the special people in Ward 57 Special Services who helped with his cancer treatments and then took amazing care of him during his final days.

As per Malcom’s wishes, there will be no funeral service held.