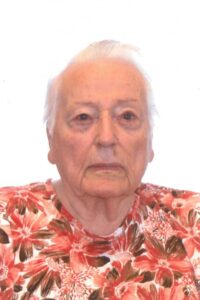 Madeline is survived by two sons Mark Cyluck and Martin Cyluck, both of Calgary; a daughter Joyce Kern of Edmonton; twelve grandchildren; sixteen great-grandchildren; and many other relatives and friends.

Born in Prince Albert, SK, Madeline moved to Flin Flon, MB and then at age 17 went to Winnipeg when she joined the Canadian Armed Forces (CWAC) for 2 years and then the Reserves for an additional 4 years with her husband Mack. She was a founding member of the Manitoba Geneological Society, chaired an organization of 500 families with autistic children (SPIKE – Special People in Kildonan East). She served seven missions for the Church of Jesus Christ of Latter-day Saints, a clear indication of her devotion. A Funeral Service will be held at The Church of Jesus Christ of Latter-day Saints – Heritage Chapel (935 Heritage Drive SW, Calgary) on Friday, September 7, 2018 at 10:00 am with visitation from 9:00 to 9:45 am. A reception will follow the service.