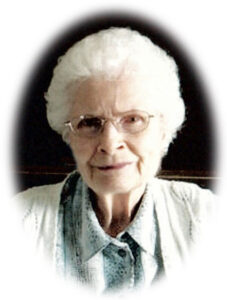 HULL, Lilley Mabel (nee McMurray) February 11, 1918 – July 13, 2013 Mabel Hull passed away at the Foothills Hospital in Calgary on Saturday, July 13, 2013, at the age of 95 years. Mabel was born on Feb. 11, 1918 at Orton, Alberta in the home of her parents, Joseph & Helena McMurray. In 1923, her family moved to the Starline – Prairieville area east of Claresholm where they resided until 1932 when they moved to Hill Spring. Mabel married George Hull in 1941 and they operated a garden and dairy farm in Hill Spring until George was fatally injured in a truck train accident in 1962. Mabel was devastated but courageously and competently continued farming until her youngest child, Nelda, went away to university in 1971. Mabel sold the cows, rented the farm, and moved to Calgary to take a Nursing Aid course at SAIT. After graduation, she worked at Foothills Hospital until she retired in 1984. Mabel will be remembered for her determination and strong work ethic, her compassionate service to others, her generosity, her sense of humor, and her great capacity to love others, especially her grandchildren who each thought they were her favorite (and they were). Mabel will be dearly missed by her three children David (Claudia) Hull, Linda (Rick) Dawson and Nelda (Jim) Layton; eight grandchildren; nine great-grandchildren; a great-great grand daughter; and a large extended family. Mabel was predeceased by her husband George W. Hull, her parents, seven siblings and a grandson. A Funeral Service will be held at The Church of Jesus Christ of Latter-day Saints Royal Oaks Chapel (81 Royal Elm Dr. NW, adjacent to the Calgary Alberta Temple) at 11:00 a.m. on Saturday, July 20, 2013 with a viewing from 10:00 a.m. until 10:45 a.m. Mabel will be interred next to her husband in the Hill Spring Cemetery that afternoon at 4:00 p.m. Messages of condolence may be forwarded to the family at www.piersons.ca.