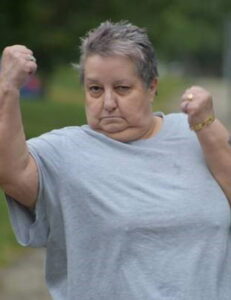 Lorraine Eve Harris (Pinotti) was born on August 26, 1947 to Gerry and Peggy Pinotti. She was a rough and tumble kid, a self-confessed tomboy. At the age of 6, Lorraine contracted polio. She fought the disease successfully but it left her short in stature (though genetics didnâ€™t help!) with the small disability of losing muscle strength in her left arm. She never let that deter her from climbing trees, skipping rocks, hiking mountains or any other mischief she wanted to be involved in.

At 17, Lorraine moved to Calgary where she would meet Wayne Stuart Harris, fall in love and get married November 10, 1966. A couple of years later, their first daughter, Tabitha May (Jay Ryan), would be born and four years later, their daughter Zabrina Lee (Stanley Warnock) followed.

Lorraine was very committed to her family. There were many days of laughter; family gatherings were the norm in the Harris household. Her children remember in fondness family picnics, huge Christmas gatherings, camping trips and many family vacations to visit relatives in the Crowsnest Pass. Losing her parents early, it was never even a question on whether to take her sister Raylene in and raise her, she just did it.

Lorraine believed in loveâ€¦ she believed everyone needed love. This was very apparent with all the friends who became family over the years. She would counsel many of Tabitha and Zabrinaâ€™s friends on matters they couldnâ€™t discuss with their own families and would act as a liaison in getting their relationships back on track with their parents. She often â€œadoptedâ€ people who had no family in the city so they never had to be alone on holidays or birthdays.
Lorraineâ€™s favourite job in life though, was being a grandmother. She spent countless hours on adventures with her grandchildren Chris, Stuart, Brittany (Matt Coates) and Nathanyal. She was their greatest fan and they all adored each other. She was blessed to see the birth of her great-granddaughter Sowa and spoiled her as much as she could in the short time she had with her.

In July 2018, Lorraine was diagnosed with myasthenia gravis; a tough auto-immune disease that would attack the muscles. This disease would be the toughest fight of her life. In October 2018, she lost her youngest daughter. Her grief was such that there was not much fight left in her. She had another myasthenic crisis in February 2019 and she just never got better after that, ultimately leading to her passing April 24, 2020.

A celebration of life will be held for Lorraine from 1:00 p.m. until 4:00 p.m. on Saturday, August 22, 2020 at Pierson’s Forest Lawn Chapel, 4121 – 17 Avenue SE, Calgary, Alberta. In lieu of flowers, donations can be made to the Hotchkiss Brain Institute, www.hbi.ucalgary.ca . As there will be no formal service, please stagger entrances to maintain pandemic protocols, and in compliance with the by-law, please wear a mask.