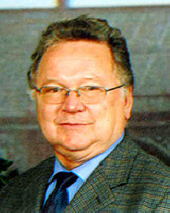 Lister Doig passed away on Saturday, September 16, 2017 at the Southwood Hospice at the age of 72 years. He will be dearly missed by his wife Lorraine; daughter Tracey Jones (Brent) and their sons Devon and Colton; son Russell Doig (Shauna Chorel) and their children Brandon, Joseph, Adrian, Kianna, Alysse and Brittany; son Jeffrey Doig (Saundra) and their children Jessica, Ian and Emmalyn; and daughter Kari Davison (who passed away June 25, 2017), and her sons Trystan and Malcolm. Lister is also survived by a brother Paul Doig (Sheron) of Cardston, AB, sister Shelley Winters (Hal) of Phoenix, AZ, sister-in-law Sharon Doig, brother-in-law Christopher Youngren, both of Calgary, and many other relatives and friends. Lister was predeceased by his parents George and Peggy Doig, daughter Kari Davison and brother Ronald Doig.

Lister was born and raised in Calgary, graduating from Queen Elizabeth High School. He completed a degree in Mechanical Engineering at the U of A, Calgary Campus and began an extensive career as a Petroleum Engineer in the areas of drilling, facilities, reservoirs and joint interest. Lister enjoyed cheering for the hometown Calgary Stampeders and Flames. He was a great handy man, loved building and spending time in the outdoors. Lister had a passion for Scouting, which he considered his most important work. His tireless work is evidenced by many awards including a Lifetime Achievement Award (40 years of service), Award for Fortitude and the Silver Acorn. Lister was an inspiration, mentor and friend to many. He had a strong work ethic, was honest in his dealings and led a life of integrity. As a man of God, he served diligently in the Calgary Temple. Lister’s greatest love was his family who will remember him as a wonderful husband, father and grandfather.

The Doig family extends their sincere thanks to the staff and caregivers at Southwood Hospice for their excellent loving care of Lister during his time there. Special thanks is also extended to the EMS crew who were so kind and patient.

A Funeral Service will be held at The Church of Jesus Christ of Latter-day Saints – Bow Valley Chapel (2526 – 24 Avenue NW , Calgary) on Friday, September 22, 2017 at 10:30 am with a visitation from 9:30 am to 10:15 am. Following a reception at the Church, a graveside service will be held at Mountain View Memorial Gardens.