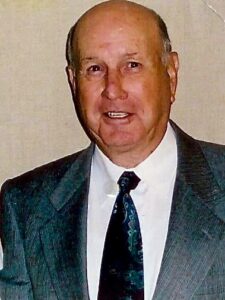 Lawrence Addison “Sham” Stevens passed away peacefully on Saturday, May 25, 2019 at the age of 87 years. He will be lovingly remembered by his wife Jo-Anne of 65 years; children Clarke (Darla) Stevens, Cathy (Ron) Anderson, Blake (Barbara) Stevens and Brad (Connie) Stevens; 21 grandchildren and 30 great-grandchildren and many more family and friends. He was predeceased by his parents Harold and Lucy Stevens; brothers Reginald, Ron, Jack and his sister Alice. Sham was born in Magrath, Alberta on July 10, 1931 and was raised in Raymond, Alberta. He met and married Jo-Anne Peterson and they began their family in Lethbridge and there welcomed their three oldest children Clarke, Cathy and Blake. After moving to Calgary, their last child, Brad was born. Sham loved all sports but he particularly enjoyed basketball in high school and golf in the years that followed. Sham served a two-year mission for the Church of Jesus Christ of Latter-day Saints in New Zealand and served in many other capacities in the church throughout his life. Professionally, Sham worked for several companies as a salesman and was particularly passionate about real estate – both the business – and the people he worked with. Shams final professional years were spent in successfully operating smaller family businesses. Sham loved his immediate family and extended family as they golfed, traveled, laughed and spent holidays together. A Funeral Service will be held for Sham at The Church of Jesus Christ of Latter-day Saints – Parkland Chapel (14540 Parkland Blvd SE, Calgary) on Friday, May 31, 2019 at 11:00 am, with a viewing at 9:30 am. Interment will follow at Okotoks, Alberta Cemetery. The family extends their heartfelt thanks to Dads caregivers at the Midnapore AgeCare facility, for the love and attention given to him for the past many months.