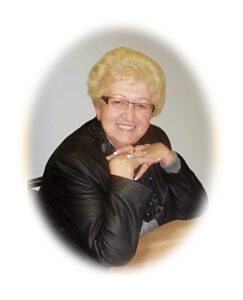 It is with sadness we share the passing of our loved one, LaJoy. She passed away peacefully at 72 years old at the Agape Hospice after her battle with cancer. LaJoy was born on May 6, 1944 in Dauphin, Manitoba to Olive and Bill Butterfield, and resided in the country outside of Grandview until she was 12 when with her parents and her brother, Tom, moved to Calgary. LaJoy loved Calgary but Grandview and Pleasant Valley were always “home” to her. After her family moved to Calgary they lived at Casey’s, and then moved to East Calgary, where she attended Colonel Walker School. During that time, she met her first two friends in Calgary. LaJoy was married the first time in 1960; from that marriage came her children Leslie and David. In July of 1964 they moved to Forest Heights and she made her home there until 2007. She divorced in 1967 and in 1968 she worked hard as a new single mother to get her hair dressing licence. She worked at Modern Beauty Salon for a very short time until she went to work at Zellers and she became a clerk in the shoe department; later moving to the Information Desk and then finally, the Cash Office. In 1975 she was introduced to Sam by their mutual friend and after dating for the next couple years they married on October 29, 1977. After leaving Zellers in 1979, she experienced several jobs and found her love of “doing books”. In 1988 she was very excited to get a job with Revenue Canada where she worked until her retirement. She and Sam retired to Bassano in 2007 where they lived in their new home and enjoyed the quiet of retirement for the next 9 years. LaJoy had a unique name, and was gifted the nickname “Lolly” by her granddaughter, Leah. The nickname stuck and although her proudest moments were being a grandma, she was never called grandma, but was Lolly to so many. She loved Sam and both of her children very much, but the great joys in her life were her grandkids, Leah, Lara and Reilly and great grandkids, Chloe and Jacob who were all perfect in every way. Lolly was so excited waiting to find out the sex of the new addition to the family. On one of their many tours around Alberta, LaJoy and Sam found Ol’ MacDonalds resort and after spending a weekend there got a spot. For many years they enjoyed “camping” and made so many wonderful memories and lifelong friendships. Only when they moved to their quiet town of Bassano did they give up the spot at Ol’ MacDonalds. When LaJoy and Sam retired to Bassano to their brand new home in 2007, they enjoyed the last nine years taking short drives around the country, knitting, painting and doing other crafts and attending local craft sales. LaJoy really enjoyed her time going down to the lodge to do residents’ finger nails, having a coffee and a visit. In July she was diagnosed with cancer and spent the next 6 weeks in the Foothills Hospital. On August 25th she moved to the Agape Hospice where she spent the last month of her life. LaJoy is survived by her husband, Sam; her daughter, Leslie (Wesley) Horton; her son, David Robertson; her grandchildren, Leah (Brennan), Lara (Matt) and Reilly; and her great grandchildren, Chloe and Jacob. LaJoy was predeceased by her parents, Olive and Bill Butterfield and her brother, Tom. Thank you to those wonderful health care workers who treated LaJoy with dignity, respect and kindness during her stay at the Foothills Hospital and Agape Hospice. And a special thank you to all the Agape volunteers that worked so hard to brighten her days. Please join her family at a Celebration of LaJoy’s Life on Wednesday, October 5, 2016 at 1:30pm at the Penbrooke Meadows Community Association, 6100 Penbrooke Drive SE (upstairs not handicap accessible), with a light tea to follow.