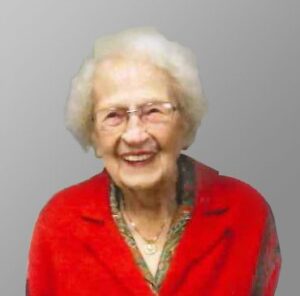 Our family wishes to announce the sudden passing of Kveta Anna Vrba, on the morning of June 16, 2018. Her earthly sojourn is now over and she has joyfully gone to rejoin the dear ones, who have passed through the veil of mortality before her.

Kvetas life began in humble circumstances, as the fourth child of a struggling stone cutter, in a small village in Czechoslovakia. Along with her 5 siblings, parents and paternal grandparents, she experienced the full effects of all the horrors of WW1. In spite of their life of poverty, she cherished the fond memories of her early childhood, amidst her large family of 10, living in their tiny house. She credited her virtuous mother for making her childhood so wonderful, even in such dire circumstances. Tragedy cut her childhood short, as she lost her mother at the age of 11. Her father re-married several years later and Kvetas already difficult life became unbearable. She finally left her abusive father, uncaring step-mother and ventured out into the world at the age of barely 19. She often recalled those times of struggling to survive in a big city, being alone and without support. As a trained seamstress, she learned to work hard and rely on her own abilities very early in life. She liberally shared her small income as she sent money back home.

Her long life led her through many struggles and challenges. She lived through some of the worst catastrophes of modern history, witnessing first-hand the great depression and the unprecedented horrors of WW2. When it appeared that things would finally get better, she would be forced to live another 20 years under a ruthless communist dictatorship. At the age of 51, leaving everything behind, she ventured with her husband and 5 children on a difficult journey to freedom. Escaping the clutches of communism, she found a new life in Canada. Because of the former trauma of her childhood and young adulthood, she struggled to find happiness in her new adoptive country. Her tenacity, determination and great faith in her Heavenly Father helped her in overcoming difficulties with the new language, culture and a new way of life.

Kvetas life was devoted to service to others. She was an excellent cook and baker, spending a great part of her life in her kitchen, and many were blessed through her talents. She took all her responsibilities very seriously and devoted her life to the various tasks of taking care of her family. She was extremely creative and inventive. When consumer goods were scarce, she made things herself, from garden-grown fruit and vegetables to clothes. When money was scarce, she found work, which still allowed her to look after her household.

Kveta loved plants and flowers and always maintained a beautiful garden, all of her life, to the very end. It was not unusual to find her working hard in her garden, long after she turned 100. She had a tender love and great compassion for animals. She always made sure there was something out there for all the birds and wild animals during the harsh Canadian winters. Kveta strongly believed that animals will be with us in the afterlife and looked forward very much to reuniting with our little troublesome Jack Russell terrier there. She was a good friend and turned all the tragedies that befell her into empathy and compassion for others.

Kveta was very active in the Church of Jesus Christ of Latter Day Saints and fulfilled many challenging assignments in the church. She spent many years working on genealogy, along with her husband Cenek. Even with her faults and imperfections, she was a great example of faith, tenacity and perseverance to her family and all who knew her.

Lately, she often spoke of her great desire of seeing once again all her loved ones, who passed away before her, especially her husband. After her arduous journey through mortality, as the path was often strewn with tragedy and thorns, it is comforting to know that her desire has now come to pass. Her soul has now found respite from a difficult life. She is finally at peace.