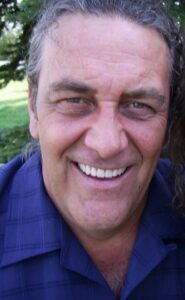 He will be greatly missed by his wife, Melanie; siblings, nieces, nephews and many, many friends.

Ken lived for friendship. He knew everyone and everyone knew him. He and Mel could not go on vacation (even to the Dominican) without running into someone Ken knew. He was loud, gregarious and biosterous with a hilarious sense of humour. People loved to be around him.

On the softer side, Ken was also a very genuine and honest person. He was a defender of the weak and he stood up for people. He’s also been known to be protective of his nieces. He and his brother, Kevin would carefully screen (jokingly intimidate) any new boyfriends that came around. Although he started out as a dog person, after meeting Mel he became a cat lover. Ken also had many interests including music, golf, gardening and automotives. At work, people called him Dr. Exhaust. At home, he was so proud to have grown his own, prized potatoes.

A gathering of family and friends will take place at Buffalo Bob’s on Saturday May 26 starting at 11.

Memorial donations may be made to a pet rescue organization of your choice.