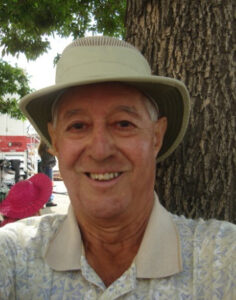 Kenneth passed away on May 31, 2015, with the woman he loved with all his heart at his side. He was diagnosed with idiopathic pulmonary fibrosis more than 5 years ago and since he knew it was a battle he could not win, he decided the best way to deal with it was to just accept it , and continue living life for as long as he could doing the things he loved to do. While he could, he enjoyed plating golf with his wifeVivian, walking with her and enjoying nature and country drives together, spending time with his and her families and visiting his grandchildren in Idaho and Victoria. Ken and Vivian also very much enjoyed spending a month or two each winter in Palm Springs, California.

Ken was born in Edmonton, and came to Calgary with his younger brother Bill and older sister Marion in 1942. He and his brother spent the next few years at Wood’s Christian Home but when he graduated from grade 9 he had to leave and his father found a family that took him in while he continued his schooling. He graduated from Central High School in 1949.

He worked for Royal Life Oil from the time he was 19 and later when he obtained his RIA accounting certificate (subsequently changed to CMA and now CPA), he joined ATCO Ltd. In 1965, he was transferred to Nampa, Idaho, where he was controller for Northland Camps Inc. This was an ATCO company established to manufacture relocateable structures for US Marine Corp. during the war in Vietnam. After the war, the company name was changed to ATCO Homes Inc. and it entered into the manufacture and sale of mobile homes. Several years later it was decided to close the factory due to extreme competition, and in 1978 Ken was relocated back to Calgary where he became accounting manager for the International Division. A few years later the International Division was restructured and he was transferred to ATCO Gas where he remained till he retired in 1996.

When Ken was 21 he married his 19 year old sweetheart Jessie Misura and they had 5 beautiful children together. They had a wonderful life but sadly Jessie became ill with a terminal medical condition when she was 54. She passed away in the Foothills Hospital long term care section at the age of 61. Vivian was one of the nurses who looked after Jessie and after she passed away, he and Vivian started to see each other and they married 3 years later.

He is survived by Vivian, his loving wife for the last 23 years, his son Kenny in Victoria, his son Bill in Vancouver, his daughter Lorraine (Osiowy) and his son Brian in Calgary. His daughter Brenda developed cancer and predeceased him 7 years ago. He is also survived by his brother Bill who lives in Carstairs, Alberta, and his older sister Margaret Thorpe (Maggie) in California and sister Marion of Saskatchewan He had 13 wonderful grandchildren and 13 great grandchildren, all of whom he loved greatly. There was nothing he would not do for his family and he was always there to help or do things to make their lives easier for them. He had also become close to Vivian’s grown up children and in particular Nicole with whom he became a father figure to.