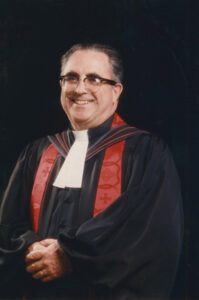 With sadness the family of Keith Wilcox announces his passing on April 6, 2014 at the age of 86. Keith was predeceased by Allie his wife of 57 years in March 2009. Keith is survived by daughter Marie of Calgary and sons Bill of Peterborough and Malcolm of Calgary. Keith was a minister with the Presbyterian Church in Canada for 41 years, serving congregations in Ontario, British Columbia and Alberta. As a minister in the early 1980’s Keith, along with other clergy in the city, set up the Calgary Inter-Faith Food Bank to serve the need they saw. Keith loved to travel and had many wonderful camping adventures through the years with Allie and the kids as they were growing up. Later in retirement Keith and Allie enjoyed traveling the continent North, South, East and West in their motor home. The family would like to extend sincere gratitude to the staff at the Carewest Sarcee C3 day program and home care program for making such a difference in Keith’s later years. Thanks as well to the staff at Clifton Manor Nursing Home for assisting Dad in the often difficult final few months of his life. And thanks as well for the excellent palliative care Dad received in his final days and the amazing comfort care the family received from the medical staff in Unit 51 at the Peter Lougheed Hospital. A Memorial Service, conducted by Reverend Jan Hazlett, will be held at St. Andrew’s Presbyterian Church, 703 Heritage Drive S.W. Calgary on Thursday April 10, 2014 at 11 am. Those wishing to make a donation may do so to Dad’s favorite charity, Cariboo Presbyterian Church, P.O. Box 156, Lac La Hache, British Columbia V0T 1K0. Arrangements are in care of Pierson’s Funeral Service. Telephone 403-235-3602. Messages of condolence may be forwarded to the family at www.piersons.ca.