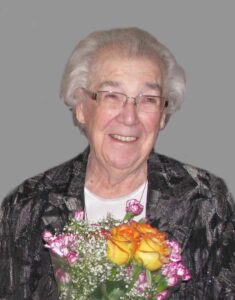 Kathleen “Kay” Harris passed away after a brief illness Wednesday, February 19, 2014 at age 87. She is lovingly remembered by her husband of 62 years, Edmund Alexander “Ed” Harris; children Bradley Harris (Libby Deeley) of Memphis, Laurie Harris (Merle Woods), Malcolm Harris (Barbara) and Murray Harris (Corrine Fiesel) all of Calgary; six grandchildren, Graham, Kathryn, Colm, Cael, Lachlan and Lance; sister Patricia Abram of Pickering, ON; and numerous extended family and friends. Born in Edmonton, Kay graduated from Calgary’s Crescent Heights High School, attended business college, and worked for several years, marrying Ed December 19, 1951. They lived at various times in Edmonton, Calgary, and Flin Flon, MB. Kay was one of the original Glenbow Museum education docents and volunteered with Glenbow throughout her life, receiving accolades for her service for Glenbow and Fort Calgary. For many years she aided Ed’s involvement with the British North America Philatelic Society and Calgary Philatelic Society. She and Ed forged many lifelong friendships and enjoyed their travels to philatelic events worldwide. Kay enjoyed reading, travelling, camping, collectibles, gardening, cooking, and family get-togethers. At Kay’s request, there will be no funeral. However, the family will hold an afternoon Tea Service at Staywell Manor (3rd floor Social Room) 174 Ypres Green S.W., Calgary, AB on Monday, March 3, 2014 at 3:00 p.m. In lieu of flowers, donations may be made in Kay’s name to the Glenbow Museum. Messages of condolence may be forwarded to the family at www.piersons.ca. Arrangements are in care of Pierson’s Funeral Service. Telephone 403.235.3602.