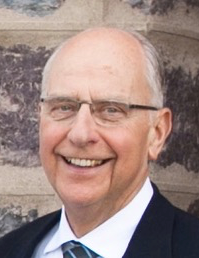 With tenderness of heart we bid farewell to our Dad and Opa. Karl passed away after a long battle with leukemia early in the morning of January 13, 2020. With Sadness, Anita, his dear wife of 57 years, passed away in October of 2019, and he will be missed by his loving family who he now leaves behind: his children Tanya (Shawn) Jensen, Monica (Doug) Percharsky, Steven (Michelle) Bodon; grandchildren Greg (Katie) Percharsky, Stacey (Kris) Schillinger, Connor (Whitney) Jensen, Haley (Keanu) Funa, Arian (Ryan) Eldredge, Joshua (Maranda) Bodon, Tayler (Joshua) Whitmer; fifteen great grandchildren; and many more family and friends.

Karl was born in Stuttgart, Germany on October 17, 1937. In 1945 he moved with his family to Salt Lake City, Utah, USA. While growing up he attended South High School in Salt Lake City and subsequently attended BYU and the University of Utah where he earned his bachelors degree in marketing and accounting and ultimately attained his MBA. While attending Brigham Young University he was able to share his gift of singing as a soloist with the BYU Madrigal Singers. Music was always a great love for Karl and he enjoyed sharing that talent with all around him.

In 1969 Karl and Anita moved their young family from Salt Lake City to Calgary, Alberta so that Karl could take the position of President of American Western Life Insurance Co. which later became Paramount Life Insurance Co. It was a move that Karl often expressed his gratitude for and with eagerness celebrated each anniversary of that occasion.

Karl was a very active member of the Church of Jesus Christ of Latter-day Saints and was blessed to serve in many different capacities throughout his life. The highlights of that service would have been his missionary service in the then Swiss Austrian Mission and then later as he served as the Bishop in a congregation of young single adults. His service was not limited to church service. Karl spent the better part of twenty years closely working with the Drop In Centre in Calgary. He cared a great deal for those who were not as fortunate as he and his family, and worked tirelessly with others in an effort to obtain the resources needed to offer the care and assistance required by those in need.

A Private Family Service will be held for Karl and he will be interred at the Okotoks Cemetery, (Okotoks, AB).