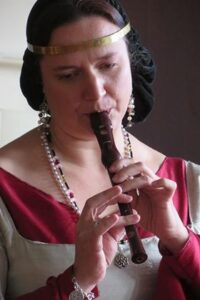 Kari was born and raised in Calgary and Strathmore. In her youth she was active in gymnastics, dance, and music. She loved horses and took riding lessons from her friend Diann Bruce who said she had impeccable timing because of her agility and strength. The ponies knew they had to obey when she was riding them. At this time she also developed a passion for making papier mache masks, and was a teacher for the Calgary Gymnastics Club. After Junior High School she traveled to Sweden where she attended grade 10 and learned Swedish and other languages. She returned to Calgary to complete her education at Central Memorial High School. Kari attended the University of Calgary where she completed a BSc in Biology. During this time she was married to Barry Boehme and gave birth to their son Trystan in October of 2001. She balanced the challenges of university studies and raising a child. Kari started working in the accounting field after her graduation, and then continued her schooling at SAIT where she further studied Accounting in order to develop her career. In 2009 Kari married Jeffrey Davison, a relationship that granted them a son Malcolm in January 2011. Kari loved her children and worked hard to support and care for them. Most recently Kari enjoyed her employment with FBC where her work as a Member Service Representative earned her great praise.

Passion and drama coloured Kari’s life. She had a keen interest the medieval world and enjoyed her membership in SCA (Society of Creative Anachronism) and in LARP (Live Action Role Play). She started the business “A Thousand Masques” where she created authentic time period costumes and accessories. This was what supported her family during a period of unemployment. She also researched candle making and learned to make candles the traditional way, even making her own tallow. Another self-employment venture was her tax business titled In The Bank.

She was always adventurous, seeking new challenges, and with her intelligence and perseverance making things happen. A dynamic leader with great organizational skills, she worked on the Comic-Con exposition for a couple of years, making a success of her contribution. She would throw herself into all of her projects from her music, poetry, drama, work or children. One of her best traits was how she would help others and make everyone feel accepted and loved. Her departure leaves a large hole in the lives of her family and friends.

Kari will be dearly missed by her two sons Trystan Carl Boehme and Malcolm Bruce Davison, and their fathers Barry Boehme and Jeffrey Davison; her parents Lister and Lorraine Doig; a sister Tracey Jones (Brent) of Calgary and their two children Devon and Colton Jones; two brothers: Russell Doig (Shauna Chorel) of Calgary and their children Brandon, Joseph, Adrian, Brittany, Kianna and Alysse; and second brother Jeffrey Doig (Saundra) of Midland, Texas, and their children Jessica, Ian and Emmalyn. Kari also leaves a large extended family and many friends.

A Funeral Service will be held for Kari at The Church of Jesus Christ of Latter-day Saints – Bow Valley Chapel (2526 – 24 Avenue NW , Calgary) on Tuesday, July 11, 2017 at 2:00 pm with a viewing at 1:00 pm. Kari will be cremated and her cremated remains will be interred in the family plot at Mountain View Memorial Gardens.

Memorial tributes for the boys may be made to gofundme.com/in-loving-memory-of-kari-davison.