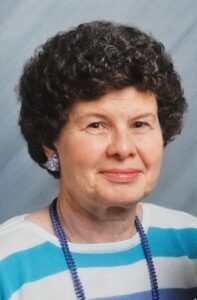 Leah “Gail” Kapiczowski (nee Dunbar) passed away with family by her side on Friday, June 10, 2022 in Calgary, Ab. Gail was born to Munro and Jean Dunbar on June 7, 1938 in Estevan Sk. She is predeceased by her parents and her husband John “Jack” Kapiczowski. She is survived by her: sons Michael (Darlene) and Mark (Lori); grandchildren Carolyn Gleeson, Aaron Kapiczowski, David Kapiczowski, Thomas Kapiczowski and Sarah Kapiczowski; great grandchildren Andre and Beau Gleeson, Quincy and Avery Kapiczowski.
Munro and Jean owned a general store in North Portal, Sk. where Gail enjoyed many happy years growing up surrounded by family and friends. In 1953 Gail’s parents sold the store and moved the family to a sheep ranch between Roche Percee and Beinfait, Sk. Gail attended high school in Beinfait. She often talked about waking up to new born lambs in their kitchen that her father had brought in overnight to stay warm by the stove.
In 1956 Gail married Jack Kapiczowski. They settled in North Portal where Jack worked for the CPR and later Canada Customs. Michael was born in 1957 and Mark in 1961. Gail and Jack were very involved in both the curling and golf clubs in North Portal, which a dusty collection of trophies and ashtray prizes attested to. They enjoyed the years surrounded by both Gail’s and Jack’s families. Once the boys were in school Gail worked briefly in the post office and for Davis Custom Brokers.
In 1968 Jack accepted a promotion with Canada Customs and the family moved to Regina, Sk. In Regina Gail worked at the Regina Inn as a secretary to one of the managers. Always wanting to improve her education Gail went to university and received her 2 year teaching certificate. She taught a special needs class at O’Neil High School. In Regina the family continued to enjoy golfing, curling and camping.
In 1974 Jack accepted another promotion with Canada Customs and the family moved to Calgary, Ab. Gail attended the University of Calgary where she completed her teaching degree. Until she retired, Gail worked in the education library at the UofC. In Calgary the family continued to enjoy camping trips and cross ski trips to the mountains. Jack and Gail celebrated their son’s weddings and the arrival of grandchildren.
After retirement, Jack and Gail, continued to enjoy time with their family. They spent summers in Sundre, Ab. camping and golfing. After Jack’s death in 2001 Gail began to travel. Travelling gave her the opportunity to explore her interests in the history, geography of far off lands, and native cultures.
In the fall of 2021 Gail was diagnosed with ALS and was forced to give up her apartment in a Seniors Home and move into a long term care facility. While Gail lost the ability to speak she continued to enjoy visiting with friends and family in person or through her new found joy of using a computer tablet.
All of her life Gail had a thirst for knowledge, especially native cultures. Her love of wildlife was fostered as a child by spending hours in the field with her father hunting and observing birds. She was always excited to research or to find a new book that would add to her knowledge.
One of Gail’s fondest childhood memories was listening to the family history stories told by her father and uncles and aunts at tea times, which sparked a life long love and interest in her family’s history. This lead to extensivie geneology research and eventually the creation of the Dunbar History book, which is a treasured keepsake for the Dunbars.
Gail’s internment will be at the North Portal Cemetery beside her mother, father and husband and surrounded by many of her North Portal friends and family. Gail always used the term “back home” meaning North Portal. She is now returning home.
In memory of Gail there will be a public graveside service at the North Portal, Sk. cemetery on Friday, June 17 at 2:00 PM, followed by a time of fellowship at the Gateway Cities Golf Club. In lieu of flowers donations may be made to the Canadian Diabetic Assoc. (www.diabetes.ca) or the ALS Society of AB (www.alsab.ca).