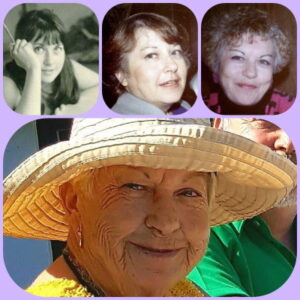 Kaaren was a free spirit, a strongly independent woman who had a curious and inventive mind, always looking for new and creative projects, art creations, systems, etc.

Born in Saskatchewan she grew up in teacherages, on the farm, and in small towns. She became an interesting combination of a solutions oriented tomboy and fashionista.  Both served her well as an artist in the creation of her pride and joy, The EcoNet.  She riveted hundreds of plastic beer and pop can holders together to appear like a net and hung it on the ceiling in a circular shape.  On it, she displayed bits and pieces of hand-picked trash from the streets of Calgary.  For Kaaren, the art was the message.

She also won first place for her dance hall girl dress made out of plastics at the Calgary Stampede and another year, third prize for her T shirt creating depicting a frog design surrounded by lily pads. Others will remember her plastic creation, The Waterfall and some of her numerous paintings and other art projects.

After graduating high school in Montmarte, Kaaren attended the University of Regina where she earned her BA with a minor in psychology.  This resulted in trips to such places as New York and Emma Lake and a job in Toronto writing an art and opinion column for Isaac’s Art Gallery.  It was during this time that she met many artists and performers who later became famous.

The freedoms of growing up in the 40’s and 50’s on the farm at Kipling and in Candiac gave Kaaren the courage to engage in many life adventures.  Most memorable was the more than two years she spent in Europe.  She loaded her beloved motorcycle on a German freighter where she was the only passenger and the only female, and set off to see the world.  While there, she had the perfect summer of job, living on the island of Zakinthos teaching English to a young boy.  Which she accomplished by going fishing and swimming with him and just pleasantly wiling away the time while they chatted in English.

After Europe, Kaaren struggled to find her place in life.  She earned her teacher’s degree in Saskatchewan and later took a journalism course at Mount Royal College in Calgary. She lived in a variety of towns while employed in these professions.  In 1979, she married Ralph Embry in Moose Jaw.  During this time, she co-owned a pizza and steak restaurant, a corner store and a second hand store.  After 5 years of marriage, they separated and she eventually moved to Calgary to be close to her sister Jane and niece Fran.

Kaaren eventually found her niche when employed by M & M Careers and Opportunity 45 as an Employment Facilitator.  She designed and created a system to find jobs for her clients by contacting possible employers and placing her clients there.  It was contract work and eventually the position disappeared.  Shortly after, she was forced to retire due to health concerns.

Kaaren applied for MAID (Medical Assistance In Dying) immediately after dementia was included in the illnesses considered for the procedure.  She was approved with a 90-day wait period, which allowed her family to come and spend quality time with her.

On Friday evening, September 3, 2021, Kaaren passed away peacefully after a day spent visiting with her family, feeling loved.

The two great loves of her life were her “doggie woggies”, Sasha and Torby.  She is now frolicking with them and with the angels.

Rest in peace, you have earned it.