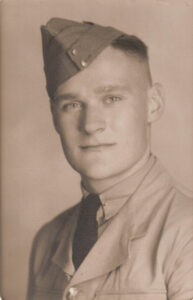 Justin Anderson, beloved husband of Albenia Anderson of Calgary passed away on Tuesday, August 18th, 2015 at the age of 90 years. Besides his loving wife Albenia, Justin is survived by his children, son Don Anderson of Richmond, BC; daughter Debby Anderson of Lone Rock, SK; son and daughter-in-law Ed and Astrid Anderson of Calgary; and grandchildren Carlina Walker, Valery Anderson and John Anderson. Justin was born in Sidewood, Saskatchewan and served his country in the Second World War with the Regina Rifles. Upon his return, Justin became an oil and gas field engineer and married Albenia in June 9, 1951, and were happily married for 64 years. Justin oversaw the laying of many pipeline projects in Alberta in the 1950’s and 60’s, then completed his career with BC Hydro and retired in the 1980’s. Justin and Albenia enjoyed the early years of retirement in Kelowna, BC before moving to Calgary in 2005. Justin enjoyed Sudoku and Crosswords, and since his University days in Saskatoon never lost his passion for the Saskatchewan Roughriders. Justin was a member in good standing of the Association of Professional Engineers and also the Knights of Columbus. He will be forever loved and remembered by his family and everyone whose life he touched. Services will be held at St. Anthony’s Catholic Church, 5340, 4th Street SW, at 10:30am on Saturday, August 22. If friends so desire donations can be made directly to the Society of St. Vincent de Paul.