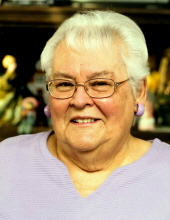 Joyce Jackson, beloved wife of Russ Jackson, of Calgary, passed away Nov 30, 2019 at the Carewest Sarcee Hospice at the age of 88. Joyce will be dearly missed by seven children Gene of Calgary, Ronald of Calgary, Richard (Shelda) of Strathmore, Sandra Downing (Rene) of Calgary, Wayne (Brenda) of Spruce Grove, Blake (Colleen) of Calgary and Bradley (Lisa) of Calgary; thirteen grandchildren Tait, Sarah, Erin, Kimberly, Amy, Curtis, Jason, Mark, Cindy, Brody, Benjamin, Halle and Lauren; six great grandchildren; a sister Louise Zentner of Red Deer, Ab; and many other relatives and friends. Joyce was predeceased by her loving husband Russ, a son Jeffery, a grandson Bryan Downing and two sisters Doreen and Bonnie. Joyce was born in Wilkie, SK and raised between the farm at Thackeray and the town of Wilkie, SK. Joyce met Russ while he was working as a farmhand for a local neighbour and after they were married, they farmed in Saskatchewan where they had the first four of their eight children. They moved to Calgary in 1958 where their next four children were born. Joyce started out her work life as a teacher in a one room school house in Saskatchewan, before putting her career on hold to raise her eight children. She loved gardening, crafts, sewing of all kinds and was very involved in both the Forest Lawn senior center and United Church Women’s Auxiliary. She was the last surviving charter member of the Forest Lawn United Church.