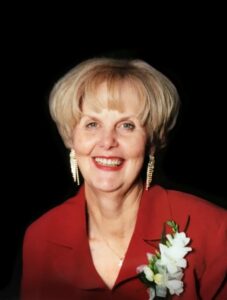 Joyce Karen Zablocki passed away peacefully in the early morning of Sunday, June 9, 2019 at the age of 80 years, in Calgary, AB. She will be lovingly remembered by her children Peter (Tracey) Zablocki, of Whitby, ON, and Jennifer (Neil) Devine, of Calgary, AB; granddaughters Edie, Nuala and Agnes; brother-in-law Ken (Natalie) Zablocki, niece Shauna (Seann) Eldan, and nephew Chris (Reece) Zablocki of Calgary, AB; her cousin Merilyn Browning, of Salt Lake City, UT; and many more dear friends and family. She was predeceased by her husband Ronald Zablocki and parents Frank & Leah Ainscough. Joyce was born on September 5, 1938 to Frank and Leah Ainscough. She was raised in Calgary, spending her younger years in Mission and later moving with her parents to their new home in Windsor Park. She often told stories of biking to school at Cliff Bungalow and spending warm summer nights swimming with friends in the Elbow River. Upon graduating from Western, she attended SAIT to study drafting. As there was not much work for draftswomen in the mid-50s, she worked as a teller at the Royal Bank. During this time, she was introduced to Ronald through work friends. He soon became her loving husband of 56 years. After getting married, they moved to Bozeman, MT where Joyce worked in the University Library and Ron finished his Education Degree. They stayed in Montana while Ron taught school, but soon Medicine Hat became their home. They intended to make their way back to Calgary but fell in love with Medicine Hat and made it their home for over 50 years. Joyce worked at River Heights School as a teachers assistant, at Rabers and later at Theresa Maries. She loved working with children and formed close friendships with the people she met through her work. Joyce adored animals and loved her pets, Max, Duffy, Shadow, Tino, & Maggie. She and Ron enjoyed musical theatre, with Joyce singing in the choir and helping with costumes over the years. They enjoyed travelling with friends to the US, with special fondness for Big Fork and San Francisco. Joyce joined Jennifer in Europe for two weeks in 2002 where they visited Paris and traveled through France together. She referred to it as her trip of a lifetime! She devoured books quietly and loved visiting with her close friends. She was kind, gentle, soft-spoken, supportive, and caring to everyone she knew. Her greatest joy was the time she spent raising her children, and later the time spent with her granddaughters. She was so excited to have grandchildren and devoted her love to each of her three granddaughters; playing and reading with them for as long as she was able. She loved them deeply. In late 2016, Joyce moved to Calgary to be closer to her daughter and family. It was comforting to have her near as her health worsened. While she struggled with memory loss in her later years, she never forgot the names or faces of those dearest to her. A Memorial Service will be held for Joyce on Saturday July 13th at 2pm, at Knox United Church in Calgary. In lieu of flowers, the family asks that donations be made to your local Humane Society to honour Joyces love of animals.