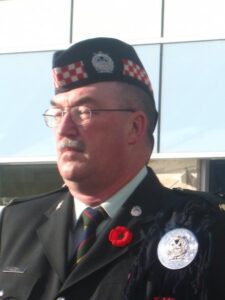 Alden, John Wellington June 28, 1953 – April 17, 2014 Captain (Retired) John Wellington Alden passed away suddenly at home from a heart attack on Thursday, April 17, 2014 at the age of 60 .His loving wife Petey of 20 years and his adoring daughter Kacie were by his side. John was admired and loved greatly. He touched many lives in a such a positive way. He will be sorely missed by his sisters, Louise (Vern) Scott of Summerville, N.B and Patricia “Pat” (Jackie) Oliver of Grand-Bay Westfield, N.B. He was a proud Uncle to numerous nieces, nephews and great nieces and nephews. John was predeceased by his mother, Elizabeth Muriel (Kelly) Alden; father, Wellington Silas Alden; and his brother, B.Gen Robert “Bob” Alden. Captain Alden retired from the Canadian Forces on June 21, 2013 after more than 37 years of service. He served with 8 units across Canada; the final being with The Calgary Highlanders. He started his career as a Cadet prior to joining the Black Watch (RHR) in 1974. He worked his way up through the ranks and commissioned from the ranks in 2005 and became a Captain with the Calgary Highlanders. In his civilian career, John was employed with BMO for more than 31 years prior to departing in 2005 as Senior Manager Western Canada Lending Operations Service Centre. John then transitioned to full-time employment with the Canadian Army until his retirement in 2013. Since then he has been employed with the Corps of Commissionaires. John enjoyed travelling with Petey, being a “skater’s” dad for Kacie, target shooting with his buddies, and camping in a dry, warm tent trailer. A Memorial Service will be held at Mewata Armories, 801-11th St. S.W. Calgary, Alberta, on Monday, April 28 at 2:00pm. In lieu of flowers the family asks that donations be made to The Veterans Food Bank. Messages of condolence may be forwarded to the family at www.piersons.ca.