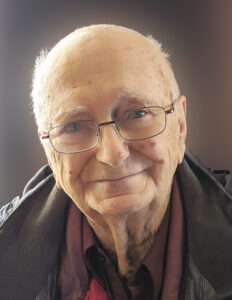 It is with deep gratitude that we express thanks for the life of John Mysyk, who peacefully passed on to his heavenly home on March 1, 2021 in his ninetieth year.

John was predeceased by his loving wife of 59 years, Joan Mysyk (nee Shipley), along with his parents, Wasyl and Eudokia, two siblings, Anne and Peter, his daughter Shelley Kay, and great-grandson James. He is survived by his children, Cindy (Milton), Andrew (Karryn), Martin (Mary Lou), Tony (Carol-Ann), Cory and Jeffrey (Andrea), sixteen grandchildren and eight great-grandchildren and numerous extended family and friends.

John was born in Krydor, Saskatchewan, the son of Ukrainian homesteaders. It was on the farm that he developed his strong work ethic that served him well all his life, which he passed down to his children. After high school, he originally wanted to go into mechanical engineering, but instead trained to become a teacher and taught for three years. When visiting Alberta, he learned about the opportunities in the oil fields and left teaching to begin working in seismic and on deep well drilling rigs.

It was while drilling a well near Cardston, Alberta in 1957 that he met his beloved wife, Joan. They were married on October 4, 1958. He began work as a drilling foreman for Canadian Pacific Oil and Gas in 1965. The family moved to Calgary in 1971, where he travelled extensively as a rig supervisor. In 1978, he took on the role of drilling superintendent with Alberta Energy Company where he continued until retirement in 1994.

Although not a member himself, he graciously encouraged Joan and their children in church activities and supported all five sons on missions for the Church of Jesus Christ of Latter-day Saints. Among his favorite traditions at Christmas were reading the Christmas story from the bible, singing carols and feasting on traditional Ukrainian foods like cabbage rolls, perogies, and mush cookies.

He had a lifelong passion for woodworking, creating furniture, wooden clocks and jewelry boxes, an entire wagon and treasured cedar chests or memory boxes given to each grandchild. His talent for farming was showcased each year in the bountiful fall harvest from his backyard garden; he was especially proud of his tomatoes. His love and care for each family member will remain a treasured memory in their hearts.

Deepest thanks to the doctors and nurses at the Rockyview General Hospital, Unit 71, for their kindness and quality care.

Family and friends are invited to a viewing at Pierson’s Forest Lawn Chapel (4121 – 17 Avenue SE, Calgary) on Friday, March 5, 2021 from 6:00-9:00pm. Due to the COVID-19 restrictions we are only able to invite in 20 guests at one time. A Private Family Funeral Service will be held for John at Pierson’s Forest Lawn Chapel on Saturday, March 6, 2021 at 10:00am. All are invited to watch his funeral service proceedings from the comfort of your home via the zoom link below. A private graveside service will follow at the Glenwood Cemetery in Glenwood, Alberta.