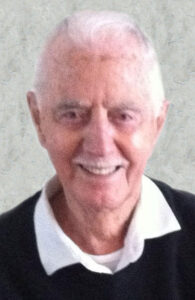 BOGLE, John McReadie December 18, 1922 – November 10, 2013 John Bogle passed away peacefully on Sunday, November 10, 2013 at the age of 90 years. He will be lovingly remembered by his wife of 44 years Norma; daughters Linda (Terry), Eileen (Derek), Deb (Mike); son-in-law Gerry; grandchildren, Todd, Darren, Tanya, Shawna, Amanda, Steven and Ryan; great grandchildren, Emily, Wyatt, Kate, Sage, Carson and Sylvia; brothers, Andy, Bob and Jim; sister Betty; and many more family and friends. He was predeceased by his daughter Kim, granddaughter Geneva and younger brother Dick all of this year. John was born in Kilbirnie, Ayr, Scotland and emigrated to Canada when he was four and his brother Andy was two. They settled in Roblin, MB. John spent five years in the Canadian Army during WWII and was overseas in Britain, Sicily, Italy and Western Europe. He worked for Manitoba Power for five years and then moved to Calgary and worked in the engineering department for the City of Calgary Electric System for 28 years. John’s passions were Golf and Music. He sang in a Barbershop chapter for 10 years and he taught himself to play the guitar and the organ. He also enjoyed playing bridge and after 14 years of studying Spanish, became fluent. John was a proud member of the Royal Canadian Legion. John and Norma traveled all over the world and enjoyed life to its fullest. Rest in peace John (Dad). We all love you and will miss you. The family would like to thank all the staff of both the Rocky View Hospital and Southwood Hospice for their loving care, it was greatly appreciated. A Memorial Service will be held for John at Pierson’s Garden of Peace Chapel (16 Avenue & Garden Road/100 Street NE, Calgary, on Rocky View Garden of Peace Cemetery) on Saturday, November 16, 2013 at 10:30 a.m. If friends so desire, donations may be made in memory of John to a charity of their choice. Messages of condolence may be forwarded to the family at www.piersons.ca.