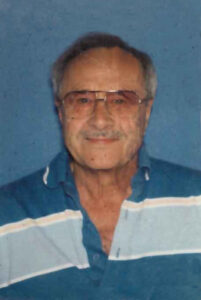 Johnny Urschel passed away peacefully on Friday, November 7, 2014 at the age of 95 years, 4 1/2 years short of his intended goal of living to be 100. Johnny always considered himself a farm boy, having been born on a farm in Bateman, Saskatchewan, farmed in Grenfel, Saskatchewan and enjoyed 30 years working for the Saskatchewan Wheat Board in various towns, ending up in Winnipeg, Manitoba. During WW II, Johnny enlisted in the Royal Air Force (1941-1945), and being a perfectionist, said he “Was happy to send the planes back in far better shape than when they arrived.” In 1944 he married Muriel Goodfellow and they had two children Eugene and Sandee. After retiring Johnny moved to Calgary where he continued his passions of dancing, golfing, photography, wood carving and hiking in the great outdoors. He will be lovingly remembered by Eugene and Joyce Urschel of Perth, Australia; Sandee Sterlyn of Winnipeg, Manitoba; his Lasko grandchildren Ryan, Waine, Barrett and Ashley; his great grandsons Carsyn and Zander; brothers Wilbert (Carol), Fred (Pat); sisters Minnie, Mary (Jim), and Joan; numerous nieces and nephews, cousins, the Dickinson family and many more family and friends. Johnny was predeceased by his father John and older sister Minnie who passed away of the Spanish Flu in 1918; his grandmother Dorthea Gattinger, his mother and her husband Elizabeth and Fred Neubeker, and siblings Henry, Kay, Isabel, Elmer and Ernie. A special thank you to Maureen Neubeker for her devotion to her Uncle Johnny over the last few years. A Memorial Service will be held for Johnny at the Royal Canadian Legion #285 (9202 Horton Road S.W., Calgary) on Monday, November 17th, 2014 at 11:00 A.M.