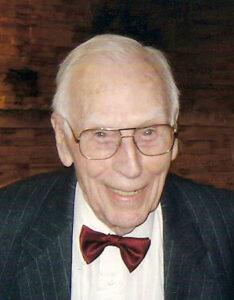 Jack Spensley died peacefully at the Foothills Country Hospice, near Okotoks, on September 8, 2011 at the age of 94 years. Jack was born in Craghead, England on October 14, 1916, the middle of 9 children of Bill and Mary Spensley. The family emigrated to the Bowden, Alberta area in 1928. In 1932, Jack started work as a hired man on a farm west of Calgary. On the neighboring farm of Heber and Bertie Smith, Jack met Laura who would become Jack’s lifelong companion until her passing in December 2008. Their love for each other was the defining feature of both of their lives. Jack worked at the Union Milk Company in Calgary for many years. He and Laura built their own home in Killarney, where they raised their children, Doug, Ellen and Harold. Following retirement, he worked as a Handi-bus driver, and especially enjoyed working at Heritage Park. Jack and Laura spent most of their spare time in the mountains and forests of Alberta, hiking, fishing, and camping, and enjoyed travel to many countries. Jack was also an excellent musician, involved in choral music for much of his life. In 2002, Jack and Laura moved to the Mackenzie Towne Retirement Centre, where they made many friends and enjoyed a leisurely lifestyle. Following Laura’s sudden passing in 2008, Jack experienced several illnesses, and was admitted to the Foothills Country Hospice near Okotoks on September 1. The peaceful country surroundings were a great comfort to Jack and his family in the last few days of his life. Jack is survived by his family; children Doug (Mary), Ellen (Doug Darling) and Harold (Nancy); grandchildren Ken (Kaleen) Darling, Russel Darling, Janet Spensley, Allan (Sarah) Spensley, Adam Spensley and Corbin Spensley;great-grandchildren Kyle, Kennady and Kiana Darling, Leah and Rheannon Spensley, and Sabina Rodrigues; and by his sister and brother-in-law, Freda and Jack Geldart of Edmonton and many nieces and nephews. All the grandchildren and great-grandchildren called him Grampa Jack, which was a great thrill to him. He was very proud of all his family. The family requests that donations be made to the Foothills Country Hospice in lieu of flowers. Messages of condolence may be forwarded to the family at www.piersons.ca.