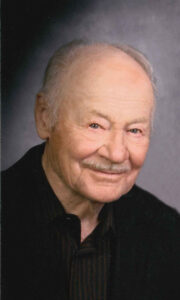 John Miessner passed away peacefully on Thursday, February 19, 2015 at the age of 89 years. Predeceased by his loving wife Thora, he will be lovingly remembered by his sons Brian (Jeanine) and John Jr.; grandchildren, Amanda Hauser (Garrad), Nicole Stephen (Sean-Michael), Noah Miessner (Serena) and Travis Kerns-Stevens; great grandchildren, Ashley and Evan Hauser, and Cael and Nora Stephen. John was born on a farm in Saskatchewan, one of 8 siblings. Rose Braun, Annie Dick, Theresa Williams, Alma Jones, Jack Miessner, Harry Miessner and Roy Miessner. John farmed in Coleville and later Kindersley, Sask. While farming he also ran a gravel construction company. In 1969, he and Thora relocated to Calgary were he started a new career building custom homes. In his spare time he was a successful sportsman winning many Curling championships in Alberta including the Southern Alberta Seniors on multiple occasions. In his later years John worked as a heavy equipment operator for excavating contractors and retired at 87. A Funeral Service will be held for John at Renfrew United Church (956 Radnor Avenue NE, Calgary) on Saturday, February 28, 2015 at 1:00 pm. If friends so desire, donations may be made to the Heart & Stroke Foundation (www.heartandstroke.ab.ca).